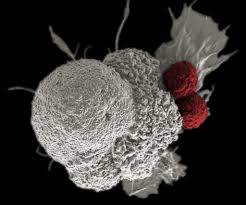 Immunotherapy is the use of drugs to stimulate a person’s own immune system to recognize and destroy cancer cells.  In 2015, immunotherapy was in the news for successfully treating melanoma that had metastasized to President Jimmy Carter’s liver and brain.  Doctors started with radiation, with the idea that cancer cells damaged by radiation would attract the attention of the immune system.  Then President Carter received a checkpoint inhibitor.  Checkpoints are proteins on immune cells that need to be turned on or off to start an immune response.  Three months after he first began receiving immunotherapy, the then-91-year old found out that his tumors were gone. Furthermore, it is very likely that President Carter’s immune system will protect him against this type of cancer from now on and that the cure will be permanent.

Unfortunately, the use of immunotherapy for breast cancer has lagged behind its use for melanoma, lung cancer, and some other cancers.  The reason may be that breast cancer has fewer mutations than some other cancers, so the immune system is less likely to recognize breast cancer cells as foreign.  This would explain why immune checkpoint inhibitors have been less effective in attacking them.  Currently, the type of breast cancer that responds best to immunotherapy is triple-negative breast cancer (TNBC).  Triple negative breast cancer means that the three most common types of receptors known to fuel most breast cancer growth–estrogen, progesterone, and the HER-2/neu gene– are not present in the cancer tumor. In March 2019, the FDA approved the immune checkpoint inhibitor atezolizumab (Tecentriq) in combination with nab-paclitaxel for patients with PD-L1 positive, unresectable locally advanced or metastatic TNBC.

New research is focusing on additional new ways of using the immune system to treat different types of breast cancer.  In an April 2019 review in JAMA Oncology  the authors determined that there were 290 ongoing clinical trials for immunotherapy for breast cancer. Many of the 290 trials are testing chemotherapy combined with immunotherapy because it is theorized that chemotherapy can sensitize tumors to immune checkpoint blockade therapy.  Researchers are also testing the combination of checkpoint inhibitors with other therapies such as MEK inhibitors, PARP (poly-ADP ribose polymerase) inhibitors, and cyclin-dependent kinase (CDK) 4/6 inhibitors.

Because immunotherapy drugs work by essentially removing the brakes on the body’s immune system, there can be some serious side effects from their use. For example, the immune system could attack other parts of the body, which could cause serious or even life-threatening problems in the lungs, intestines, liver, hormone-making glands, kidneys, or other organs.

To learn more about how drugs that work on the immune system are used to treat cancer, see Cancer Immunotherapy.

To learn about some of side effects and how to manage them, see Managing Cancer-related Side Effects.