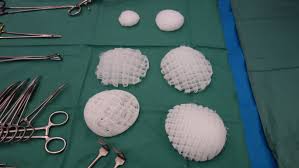 3D printing is revolutionizing many fields, including medicine.  For cancer, it can be used in every step, from detection through reconstruction.  The process begins by designing a 3-dimensional object using computer-aided design (CAD). Then the program goes to a printer, where the object is built layer by layer in three dimensions. Right now, 3D printing is being used to build various kinds of prosthetics and dental implants. It is used in reconstructive surgery at M.D. Anderson Cancer Center to replace parts of the face, neck, and head that were damaged by cancer or cancer surgery.  3-D printers are expected to eventually be able to print living, working human organs, so transplants from organ donors will no longer be needed. In 2015, the U.S. Food and Drug Administration approved a pill for epilepsy that was made by 3-D printing. Radiation shields have been printed that can make radiotherapy more accurate and comfortable. The possibilities seem endless.

One of the uses of 3D printing is for breast prostheses and reconstruction after mastectomy.

External breast prostheses have been a good solution for women who won’t have reconstructive surgery, but some prostheses are uncomfortable, have an unnatural appearance, and/or cost too much.  3-D printing can address all these problems.  Materials are continually improving, and problems with comfort and appearance can be addressed through selecting the right materials and customizing the sizing.  3D printed prostheses can also cost much less than the old custom-made prostheses. When I Googled 3D prostheses, I did not find much in the U.S. yet, but I did find them in other countries:

Meanwhile, you can 3D print customized prostheses yourself using the Free Open Source 3D Customizer.  I imagine you would need some technical skill, but you can print whole breasts or you can print partial breasts if your surgery left you uneven, or even if you just want to change the appearance of your breasts without surgery.  The density of the prosthesis can be varied to produce optimal comfort and a natural look and feel.

3D printing could also help breast cancer patients regrow their own breasts.  A team at the Queensland University of Technology, Australia, has developed 3D printed scaffolds measured specifically for each individual patient.  The scaffolds are implanted into the patient’s chest and filled with her own cells plus a growth enhancer.  As the tissue grows, the scaffold biodegrades and disappears, leaving the patient with her own breast tissue.  So far, the researchers have reported a 100 percent success rate in animals.  If they get the same result in human trials, the technology could be available to women in about four years.  You can watch a You Tube explaining the procedure here.  The same team is also experimenting with putting chemotherapy drugs in the scaffold instead of using intravenous chemo.

When you have breast reconstruction, false nipples usually have to be tattooed on.  The tattoos are not always realistic, and they also fade and have to be retouched.  Now, a company called TeVido BioDevices in Austin, TX is 3D printing nipples using the patient’s own living cells.  You can watch a You Tube that explains it here.

Some of these procedures will be costly.  When breast surgery is needed, insurers are required to cover prostheses and reconstruction.  However, some of the newest procedures might not be covered yet.  Check with your insurer.