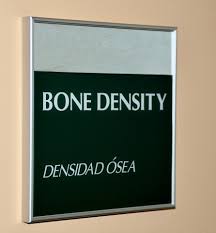 About 80% of breast cancers are estrogen-receptor-positive, which means they need estrogen in order to grow.  Anti-estrogen hormones are usually prescribed to prevent estrogen from reaching the receptors or to stop the body from making it, and there is evidence that using anti-estrogen hormones reduces the risk that breast cancer will recur. There are two main types of oral anti-estrogen therapy (also called hormonal or endocrine therapy).  Selective estrogen receptor modulators (SERMs) can be prescribed for women of any age. Aromatase inhibitors (AIs) are only prescribed for women who are post-menopausal.  (For an explanation of anti-estrogen hormones, see last month’s blog.)  Each type works in a different way and has different side effects.  One side effect of AIs is that they can cause the bones to become thinner, which can sometime lead to osteoporosis and possible fractures, since the principal cause of osteoporosis in women is a lack of estrogen.  Since post-menopausal women have reduced estrogen levels even without anti-estrogen hormones, osteoporosis is fairly common in women over 50 years of age.  Women who are treated with AIs are also usually treated with drugs such as bisphosphonates to prevent bone loss. Common bisphosphonates include Reclast, Fosamax, Actonel, Boniva, Evista, Alendronate, and Zometa.

Since I had estrogen positive breast cancer, I was prescribed AIs.  Before starting the hormones, I had a DEXA (dual energy X-ray absorptiometry) scan to assess my bone mineral density (BMD). DEXA results are most commonly reported as T-scores, which compare your score with the ideal or peak BMD of a healthy 30-year-old. T-scores are reported in standard deviations. If your T-score is zero, that means your BMD is the same as the 30-year-old’s. If your T-score is one standard deviation above or below zero (-1 to +1), that is also considered normal. A T-score between -1 and -2.5 indicates that you have low BMD, also called osteopenia. If your T-scores are below -2.5, you have osteoporosis. They scanned my lumbar spine and my hips and compared my results with a DEXA scan I had two years earlier. The results indicated that my lumbar spine was within normal limits but that I had mild osteopenia in both hips. When these results were compared with the results of a DEXA I had two years earlier, the differences were insignificant.

Hormone therapy is prescribed and monitored by the medical oncologist.  In addition, my endocrinologist and my integrative oncologist also weighed in. They all agreed that I should take bisphosphonates to protect my bones; however, they disagreed about the dosage. My integrative oncologist recommended taking a much higher dose than the endocrinologist did. The reason he wanted the higher dose was that, as well as helping protect bones, there is also a documented reduction in cancer recurrence in postmenopausal women with early stage breast cancer when they take bisphosphonates. The endocrinologist thought the dose that the integrative oncologist recommended was too high and might cause me to get side effects such as necrosis of the jaw and suppressed bone turnover. During this time, I also saw a very highly-regarded research oncologist to ask questions on a variety of subjects related to breast cancer, and she also weighed in on bisphosphonates. She said that she would not recommend taking any bisphosphonates unless my bone density was -2.5 (osteoporosis) or worse. She said that the evidence that they do any good is dubious, since use of bisphosphonates is associated with more brittle bone.

Since nobody agreed, I looked up bisphosphonates on Wikipedia, which said that after 3-5 years of treatment, BMD was maintained and fractures were reduced for 3-5 years afterward. Zometa reduced the risk of fractures to the hips by 38% and of fractures to the vertebrae by 62%. Wikipedia also said that some women who took bisphosphonates for osteoporosis had unusual fractures in the shafts of their femurs. However, these fractures were much less common than fractures to the hips. There were also concerns that long-term use of bisphosphonates might result in over-suppression of bone turnover (this is what my endocrinologist referred to). However, this complication is unusual, and it was felt that the risk was outweighed by the benefit of reduced fractures. Intravenous bisphosphonates have been associated with osteonecrosis of the jaw (ONJ). In about 60% of cases, the ONJ seems to have been triggered by dental surgery involving the jaw bone. It is now recommended that patients postpone bisphosphonate treatment until after all needed dental work is finished. I asked my integrative oncologist about ONJ, and he said that the main thing is to avoid dental work while I am on bisphosphonates. I discussed the issue with my medical oncologist, who would be responsible for ordering the bisphosphonates. She recommended 4 mg. of intravenous Zometa twice a year. My integrative oncologist agreed, so I began treatment. I had additional DEXA scans in 2013 and 2015 after taking AIs and Zometa for two and four years respectively. The BMD in my lumbar spine was still normal, and I had a slight improvement in BMD in both hips, although I still had osteopenia.

However, it turns out that I have a serious side effect. In 2014, after three years of anti-estrogen hormones and four doses of IV Zometa, I got a toothache. I went to the dentist, had x-rays, and was told I had tooth resorption. This means that my body is destroying my tooth, possibly because of some kind of trauma. My dentist sent me to the endodontist, to see whether he could do a root canal. The endodontist took more x-rays, and told me he did not think the tooth could be saved because too much tooth structure had been lost. He sent me to an oral surgeon for extraction and an implant. When I got to the oral surgeon, he realized that I had been receiving Zometa, and he informed me that surgery would put me at risk for ONJ. He showed me pictures of jaw necrosis, and it is a hideous deformity. You can’t predict who will get it, and there is no cure. I asked if I could reduce the risk by stopping the Zometa, and he said no, because the half-life is too long. (I looked up what this meant, and found that bisphosphonates have a half-life of approximately ten years, which means that after ten years, only half of the drug has been eliminated from the body.) This means that I can’t have any extractions or periodontal surgery or dental implants of any kind for the rest of my life without risking ONJ.  I knew before I took the Zometa that ONJ was a potential side effect, but I did not know that the percentage was so high or that the side effect would last the rest of my life. Had I been informed of the true risk, I might have made a different decision.

I agreed with the oral surgeon that I wanted to avoid any risk of jaw necrosis if possible, so I went back to the endodontist and he performed a root canal.  He can’t remove the cells that cause the resorption because they are in my jaw bone, and removing them could cause ONJ. If my tooth crumbles I might still have to have an extraction and take the risk. This is very frightening to me. I also thought about the fact that millions of post-menopausal women who never had cancer take bisphosphonates because they think it will help to protect their bones. I asked everyone—my dentist, the oral surgeon, and the endodontist—whether all those millions of elderly women are also at risk for ONJ. They all said yes! My risk is higher than theirs because I took a higher dose, but I was told that the statistics indicate that two or three out of every hundred of them will get ONJ if they have a tooth extraction. I doubt that anybody told them about this side effect. Even if ONJ was mentioned, I’ll bet that they do not know that they will never be able to have tooth extractions without risking something worse than osteoporosis. Possibly some of them might have opted for the bisphosphonates anyway, but the point is that this should have been their informed decision. I imagine that if patients were really aware of their risk and what it means, sales of bisphosphonates would plummet. As I understand it, dentists are all aware of the risk, so I imagine the doctors who prescribe bisphosphonates are aware as well. Shame on them.

About a year later, I had a second tooth with resorption, and a second root canal.  The tooth structure was not as weak in this one, so there is a better chance that it will last.  About a year after that, one of my molars became infected and had to come out.  This was an emergency, so I had to search quickly for an oral surgeon who I trusted.  I interviewed two and felt very uneasy with both of them.  They both had experience with ONJ, but they gave me careless or evasive answers to my questions, and I didn’t trust them.  Finally, through a friend’s recommendation, I found an oral surgeon I did trust, and we did the procedure.  Under normal circumstances, he would have done an implant, but because of my risk of ONJ, which he estimated to be as high as 15%, we just left a hole where the tooth had been.  Luckily, it seems to have healed with no problem.

Next, we addressed the first tooth that had the resorption and root canal.  Unfortunately, that one was helping to support a bridge in the front of my mouth.  We extracted it, and I am wearing a temporary bridge as I write this.  Again, an implant would have been normal if I had not had the risk of ONJ, but because of the ONJ, we are going to extend the bridge instead.  One problem is that the second tooth with resorption and root canal is helping to support the bridge, and that tooth is in a weakened state.  If that tooth fails, the bridge will fail.  However, maybe it will be far enough in the future that we will feel safer doing an implant.  Meanwhile, the bridge will be fragile, so I will not be able to bite into things like raw apples, corn on the cob, or crusty baguettes, and I will always have to wear a night guard.  I suppose I’m lucky that I haven’t gotten ONJ.