Chemotherapy Can Cause Cancer to Spread 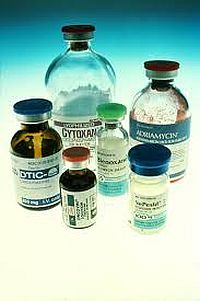 Proponents of chemotherapy for breast cancer state that, depending on the type of breast cancer and the chemicals used, chemo can reduce the 10-year risk of death by as much as one third.  Other studies in America and Australia have shown that 5-year cancer survival rates after receiving chemotherapy can be as low as 2.1%.  I was told that chemotherapy would increase my chances of 10 year survival by up to  9%, based on statistics from other patients.  Luckily, there are some ways to test whether chemotherapy is likely to work for you.

One way is to use a chemosensitivity assay.  This involves sending a live tumor sample directly from surgery to the lab.  The tumor is treated with different chemicals in order to find the chemical or other substance that works.  The other way is to use tumor genomic assays. These tests analyze a sample of a cancer tumor to see how active certain genes are. The activity level of the genes can be used to make predictions about how likely the cancer is to grow and spread and about whether chemotherapy would be likely to work.  Different tumor genomic assay tests are used for different types of breast cancer.  They include the Breast Cancer Index Test, the EndoPredict Test, the MammaPrint Test, the Mammostrat Test,  the Oncotype DX Test, and  the Prosigna Breast Cancer Prognostic Gene Signature Assay.  For reasons explained in my book, I was not able to have any of these tests, so I just had the chemotherapy regimen that was the standard of care for the type of cancer I had.  If I had it to do over, I would not agree to chemotherapy without tests that would give me some reason to believe that chemo would do me more good than harm.

Before we discuss the ways that chemotherapy can cause cancer to spread, we should first understand that chemotherapy does not cure the underlying causes of cancer.  It does destroy some cancer cells, but it also damages healthy cells and has numerous undesirable side effects, some known and some unknown.  It is up to each patient to decide for herself whether the treatment is likely to cause more benefit than harm.

One side effect that was discovered unexpectedly is that “healthy cells damaged by chemotherapy secrete more of a protein called WNT16B which boosts cancer cell survival.”  The WNT16B secreted by the healthy cells is taken in by nearby cancer cells where it causes tumors to grow.  These tumors also became more resistant to subsequent chemotherapy, so the cancer is likely to spread.  These findings occurred with prostate cancer, breast cancer, and ovarian cancer tumors.  Other researchers have put a positive spin on this finding, saying that the knowledge may be used to improve cure rates by enabling the development of ways to overcome drug resistance.   It seems to me that until these ways are actually developed, patients run the risk of harm. The study was carried out by researchers from the Fred Hutchinson Cancer Research Center and other research institutes in the US. It was funded by the US Department of Defense, the National Cancer Institute, the Pacific Northwest Prostate Cancer SPORE and the Prostate Cancer Foundation.

A second way that chemotherapy can cause cancer to spread is based on the stem cell theory of cancer. There can be different kinds of cells inside a malignant tumor or among blood cancer cells. Some of these cells act as stem cells that reproduce and sustain the cancer, the same way that normal stem cells renew and sustain our organs and tissues. Mainstream cancer theory says that any cell in the body can undergo DNA changes and become cancerous. But researchers have noted that our stem cells are the only cells that reproduce themselves and therefore live long enough to accumulate all the changes needed to produce cancer.

According to this theory, only cancer stem cells can form tumors, unlike cancer cells that are not stem cells, which are not very dangerous over the long term. In studies at the University of Michigan, researchers used docetaxel (which is what I had under the trade name Taxotere), and found that while the chemotherapy killed cancer cells, “the dying cells actually stimulated the production of cancer stem cells through the release of interleukins.” These findings have important implications. First, it seems that shrinking the tumor does not indicate that the cancer is being cured, since the stem cells are not being killed. Second, it is the cancer stem cells that cause metastasis, and chemotherapy might actually increase the chances that the cancer will come back, since it stimulates stem cells, and the new stem cells may be more resistant to the chemo. For any therapy to work, it must target the stem cells while sparing normal cells, and I hope that something along these lines will be developed to take the place of chemotherapy.

In addition to spreading breast cancer, some chemotherapy drugs can also cause a second (new) cancer; in fact, chemo is considered to be a greater risk factor in causing leukemia than radiation is.  According to the American Cancer Society, the cancers most often linked to chemo are myelodysplastic syndrome (MDS) and acute myelogenous leukemia (AML). Sometimes, MDS occurs first, then turns into AML. Acute lymphocytic leukemia (ALL) has also been linked to chemo.

In addition to spreading cancer, another negative finding about chemotherapy is that it weakens breast cancer patients’ immune systems for longer than previously thought, making them vulnerable to common infections such as pneumonia and tetanus even if they were vaccinated. In some cases, re-vaccination may be needed. The minimum length of immune system suppression is nine months after treatment but, depending on the chemicals used, some patients’ immune systems never returned to normal. I have had low blood counts, both red and white cells, ever since I finished chemotherapy, which was about five years ago. However, I have not had unusual vulnerability to infection, possibly due to my regimen of diet and supplements.

Other non-cancerous side effects of chemotherapy can be long-lasting or even permanent.  These include permanent damage or loss of hair and nails, sterility, cardiomyopathy, congestive heart failure,  and peripheral neuropathy.  Memory, eyesight, and hearing can be impaired, and there is often a lot of fatigue. Side effects are usually worse in older patients like me and, because of this, some oncologists don’t recommend chemotherapy for patients over 70.

The take-away message is that it’s a good idea for patients to make sure they are thoroughly informed so they can weigh the intended benefits of chemotherapy against the possible harm and make their own decisions.