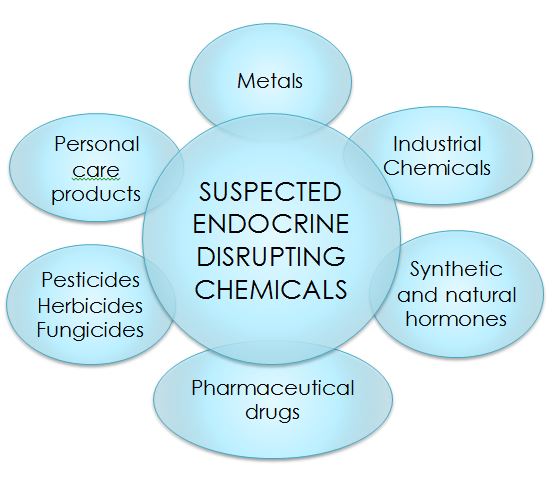 Breast cancer, already the most common cancer in the United States, is projected to rise by 50% by 2030, according to researchers at the National Cancer Institute (NCI).  They expect 441,000 new cases in 2030, up from 283,000 in 2011. Philip Rosenberg, a senior investigator in the division of cancer epidemiology and genetics at the National Cancer Institute (NCI), says that part of the rise can be attributed to the increased number of ER+ breast cancers. This trend is likely caused by changes in “circumstances and lifestyles,” but the research model looked at total numbers, not causes, he said.1

Of course I am interested in the causes, because my breast cancer was ER+, which means that it needs estrogen to grow.  I don’t want a recurrence or metastasis.  Also, I am in the majority. Almost 80% of breast cancers are ER+, and this number is on the rise. It stands to reason that the rise in ER+ breast cancer might be linked to the rise in our exposure to hormones. To make this clearer, let’s take a moment to review how the endocrine system works in our bodies.

The endocrine system is a network of glands that secrete hormones to help our bodies function. Hormones are chemical messengers that travel through the bloodstream to specific “receptors” in target organs or systems where they trigger their biological effects. The major glands of the endocrine system are the hypothalamus, pituitary, thyroid, parathyroids, adrenals, pineal, the reproductive organs (ovaries and testes), and pancreas. Ovaries produce and release two groups of sex hormones—progesterone and estrogen. Estrogen regulates the female reproductive system from puberty onward. Estrogen also has an effect on other organ systems, including the musculoskeletal and cardiovascular systems and the brain.

In addition to prescription EDCs, we also have EDCs in our food, water, air, personal care products, household products, and pretty much everywhere we can think of.

In 2012, the World Health Organization (WHO) published “State of The Science of Endocrine Disrupting Chemicals – 2012.” It reported that “Close to 800 chemicals are known or suspected to be capable of interfering with hormone receptors, hormone synthesis or hormone conversion.” Scientists estimate that up to 95% of the substances known as persistent organic pollutants (POPs) enter the body via the food supply, and some of those POPS are also EDCs.

Since the 1950s, U.S. beef cattle and sheep have been treated with several EDCs, including natural estrogen, progesterone, testosterone, and their synthetic versions. These drugs make the animals grow faster and convert feed into meat more efficiently. Monsanto’s genetically engineered growth hormone, rBGH (also called rBST), was approved in 1993, and it is estimated that it is now used in about 1/3 of dairy cows in the United States because it increases milk production. Neither the meat nor the dairy products come with any labeling that would alert the public to the presence of EDCs, even though peer-reviewed research has identified rBGH as a risk factor for both breast and gastrointestinal cancer.4

Approximately 99% of food animals in the U.S. are raised on factory farms and fed genetically modified food, living under conditions that are cruel, unsanitary, and rife with antibiotic abuse and EDCs.5 Waste runoff from factory farms pollutes the water, land and even the air: In one study, air samples were collected upwind and downwind of feedyards, and EDCs were found.6

In 1989, hormone-treated U.S beef was banned from sale in Europe, and concern about breast cancer was a major reason. Since oral contraceptives, which have a known and controlled estrogen dose, are associated with breast cancer, it was felt that uncontrolled use of hormones in meat would be too risky. Meat and dairy products containing rBGH are banned in Canada, Australia, New Zealand, Japan, Israel, Argentina, and the European Union. U.S. chicken has also been banned by several countries because it is washed with chlorine that likely lingers in the meat. Some by-products of chlorination have been classified as possible causes of cancer by the International Agency for Research on Cancer (IARC).7 Ractopamine, an EDC that promotes growth in pigs, cattle, and turkeys, has been banned in approximately 160 out of the 196 countries that exist in the world because it causes serious health and behavioral problems in animals, and because the drug remains in the meat when the animals are slaughtered.8 Interestingly, in response to the bans, the U.S. has begun a certified ractopamine-free program to sell pork products to the E.U. In other words, it certifies ractopamine-free meat for export to other countries, but Americans get the ractopamine.9

Agriculture is rife with EDCs, which are in pesticides, herbicides, and fertilizers. Probably the greatest threat is from GMOs (frequently used terminology includes genetically modified organism or GMO; genetically modified, or GM; and genetically engineered, or GE.), Nearly all of the soy, corn, cotton, canola, alfalfa, and sorghum (and wheat is coming soon) grown in the U.S. has been genetically modified to resist  Roundup, an herbicide and EDC made by Monsanto.  It has become increasingly clear that Roundup is an EDC with carcinogenic effects at lower doses than those authorized.10

EDCs are released into the atmosphere by industrial and/or agricultural combustion, direct discharge, and runoff. They can be measured in the air, water and soil. Plants take them up, animals consume the plants, and the chemicals bio-accumulate up the food chain, with the greatest concentration typically found in fat stores of animals and humans eating at the top. The type and amount of these chemicals that accumulate in all living organisms is known as the “body burden.”11

Studies by the U.S. Geological Survey and other agencies have found EDCs in many streams, rivers and lakes, and in drinking water. EDCs enter our water supply from agricultural runoff that includes pesticides, herbicides, and fertilizer; from industrial waste, fracking, and acid rain, from pharmaceuticals that slip through wastewater treatment systems and seep into the water, and from residential products used in personal care, laundry and cleaning.12

The Endocrine Society has presented evidence from animal models, human clinical observations, and epidemiological studies that EDCs affect “male and female reproduction, breast development and cancer, prostate cancer, neuroendocrinology, thyroid, metabolism and obesity, and cardiovascular endocrinology.” They tested EDCs in a broad class of molecules such as pesticides and industrial chemicals, plastics and plasticizers, fuels, and many other chemicals that are present in the environment or are in widespread use.13

One way we can help to protect ourselves and our families is by learning to avoid the dirty dozen EDCs, listed on the website of the Environmental Working Group (EWG): http://www.ewg.org/research/dirty-dozen-list-endocrine-disruptors.

Of course, completely avoiding all these things is impossible, but we can do the best we can. We can introduce changes gradually, and each little bit that we do helps—it’s not all or nothing. Remember that there are two things we can control. We can reduce your exposure to EDCs and other environmental toxins, and we can also strengthen our bodies’ ability to detoxify through proper nutrition and self-care. The other thing to keep in mind is that you vote with your consumer dollars, so making careful choices not only helps to protect you and your family; it also lends your support to safer products for everyone.

3.  N.L. Swanson. “Genetically Modified Organisms and the Deterioration of Health in the United States.” April 2013, 24. Accessed January 21, 2016. https://people.csail.mit.edu/ seneff/glyphosate/NancySwanson.pdf. This document was first published as a series of articles on Seattle examiner.com (Go back)

9.  “Meet Ractopamine: The Drug in Your Meat That Is Banned in 100 Countries.” Accessed January 21, 2016. http://robynobrien.com/meet-ractopamine-the-drug-in-your-meatthat-is-banned-in-100-countries (Go back)

10.  N.L.. Swanson. “Genetically Modified Organisms and the Deterioration of Health in the United States.” April 2013, 24. Accessed January 21, 2016. https://people.csail.mit.edu/ seneff/glyphosate/NancySwanson.pdf. This document was first published as a series of articles on Seattle examiner.com (Go back)