What You Need to Know About GMOs and Cancer 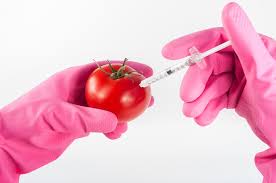 Genetic engineering, on the other hand, has nothing to do with natural mating or breeding. The aim is to produce an animal or plant with the desired characteristics by manipulating the DNA pieces and transferring them from one organism to another. The organisms can be from different species which would not be able to mate normally. Unlike natural animals and plants, GMOs can be patented and trademarked. The first GE animal was the GloFish, a fluorescent fish which was patented and trademarked and sold in pet stores starting around 2003. The original GloFish were made by extracting a gene from a jellyfish and inserting it in a zebrafish.

To produce a GE plant or animal, the desirable gene is split off from the rest of the chromosome and placed in a different plant or animal’s DNA chain. The new DNA is called recombinant DNA, and the organism that has the recombinant DNA is called a genetically modified or transgenic organism. A much wider range of characteristics can be produced by genetic engineering techniques than by selective breeding, but genetically modified genes may have unexpected side effects.

GMOs were introduced into the food supply in the U.S. in the mid-1990s and they were not required to be labeled, so consumers would not know what they were eating.

The following is quoted from the website of the Center for Food Safety (CFS), which describes the problems with genetically engineered food better than I can:

A number of studies over the past decade have revealed that genetically engineered foods can pose serious risks to humans, domesticated animals, wildlife and the environment. Human health effects can include higher risks of toxicity, allergenicity, antibiotic resistance, immune-suppression and cancer. As for environmental impacts, the use of genetic engineering in agriculture will lead to uncontrolled biological pollution, threatening numerous microbial, plant and animal species with extinction, and the potential contamination of all non-genetically engineered life forms with novel and possibly hazardous genetic material.1

The American Academy of Environmental Medicine (AAEM) says that “…because GM foods have not been properly tested for human consumption, and because there is ample evidence of probable harm, the AAEM asks:

This is from the website of the Non GMO Project:

Most developed nations do not consider GMOs to be safe. In more than 60 countries around the world, including Australia, Japan, Mexico, and all of the countries in the European Union, there are significant restrictions or outright bans on the production and sale of GMOs. In the U.S., the government has approved GMOs based on studies conducted by the same corporations that created them and profit from their sale.3

According to the USDA, over 90% of the cotton, corn, and soybeans in the U.S. are genetically modified.4  The main purpose of their modification was to make them able to resist Roundup, an herbicide and endocrine-disrupting chemical (endocrine disruptors are linked to breast cancer) made by Monsanto and used by farmers in their fields and by others in their gardens. The idea is that the farmers plant Roundup Ready seeds and then they can kill the weeds by spraying with Roundup, which does not kill the Roundup Ready plants. Roundup Ready seeds develop into plants that cannot reproduce, so farmers must buy both the seeds and the herbicide every year, which insures steady profits for Monsanto. Roundup Ready soybeans, developed in 1996, was the first genetically modified crop. Roundup Ready crops today include soy, corn, canola, alfalfa, cotton, and sorghum, and wheat is coming soon. The U.S. Department of agriculture (USDA) only keeps data on soy, corn, and cotton, but in 2012 they estimated that 93% of all soy, 88% of all corn, and 94% of all cotton grown in the U.S. was genetically modified.5 In March 2015, The World Health Organization (WHO) issued a warning that glyphosate, the main ingredient in Roundup, can cause cancer in humans.6 In 2016, in response to growing public pressure; and after testing by private companies, academics, and consumer groups detected glyphosate in food and breast milk; and after being rebuked by the U.S. Government Accountability Office (GAO) for failing to test the safety of glyphosate; the FDA finally agreed to test for glyphosate residues in food.

Some of the Roundup Ready crops are grown for animal feed, but they reach our food supply in the form of meat, eggs, and dairy products. Some are grown for use as bio-fuels or textiles. Glyphosate, the main ingredient in Roundup, has been found in 85% of cotton hygiene products tested: gauze, swabs, wipes and feminine care products such as tampons and sanitary pads.7 We have been eating GMOs contaminated with Roundup in steadily increasing amounts since 1996. If you eat a lot of corn, soy, potatoes, sugar, or packaged foods, unless they are organic, you are eating a lot of GMOs. There are significant correlations between the prevalence of GMOs in the food supply and the prevalence of various diseases, and it has become increasingly clear that Roundup is an endocrine disruptor with carcinogenic effects at lower doses than those authorized.8

Here is a list of some of the top GMO foods to avoid:

In November, 2015, over the vigorous objections of consumer groups, the FDA approved a genetically engineered (GE) salmon, which is the first transgenic animal allowed into our food supply (we have been eating GE fruits and vegetables for years). The GE salmon contains DNA from an eel-like fish that allows it to produce growth hormone year-round. This modification means that GE salmon would grow to market size in 16-18 months instead of the 3 years required for natural salmon. One problem is that the GE salmon has 35% higher levels of IGF-1 (a growth hormone) than natural salmon, similar to the levels of IGF-1 in milk caused by the bovine growth hormone rGBH. Studies show connections between higher levels of IGF-1 in the blood and higher risk of breast cancer as well as other types of cancer.17 In addition, the GE fish also pose a threat of extinction to natural salmon because some GE fish will inevitably escape from captivity and might be able to interbreed with natural salmon (although their fertility is much lower) or outcompete them for food. The FDA did not require the GE salmon to be labeled, so consumers would have no way to know which salmon to avoid.

The Johns Hopkins Bloomberg School of Public Health Center for a Livable Future (CLF) responded to the FDA approval by stating that the FDA ignored comments submitted to them by the CLF in 2010 and 2013 in which public health and ecological concerns were raised. “FDA’s approval of GE salmon was based on a process that was not designed to evaluate the full extent of potential health risks associated with production and consumption of a genetically engineered animal,” says Jillian Fry, PhD, MPH, Director of the Public Health and Sustainable Aquaculture Project at CLF. CLF went on to say that the FDA relied instead on flawed data provided by the company seeking approval, AquaBounty Technologies, Inc. CLF also noted that the decision not to require labeling will make it difficult to track impacts on food safety, as well as denying consumers the information they need to make informed choices.18

Scientists in the U.K. are already breeding GE chickens, not for food, but to experiment on ways to develop resistance to bird flu. However, if they succeed, there will likely be a lot of pressure to implant the anti-bird flu gene in chickens that are raised for food.19

There are other experiments with genetically engineering animals. A team from Korea and China has produced GE pigs with much larger than normal backsides (the part most prized for food), and they hope to sell the GE pig sperm in China. A team in Minnesota has produced GE dairy cows without horns, although so far they can’t produce milk. A company in New Zealand has produced GE cows that give hypoallergenic milk. This is only the beginning.

We discussed some of the most common GM foods, but there are many, many more, including nearly all processed foods. For a particularly scary example, all infant formula not labeled organic most likely contains GM corn and/or soy, and milk from cows that have been injected with rBGH.20

The major way to protect ourselves is to eat organic food. Products bearing either the label “100% organic” or “organic” must be grown, handled and processed without bioengineering as well as without the use of pesticides or other synthetic chemicals, irradiation, or fertilizers made with synthetic ingredients.

All organic foods are non-GMO, but not all non-GMO foods are organic. Congress passed legislation in 2016 that makes it harder for consumers to find out whether their foods are genetically engineered, but third party verification is available through the Non-GMO Project.21 All products bearing their seal have gone through their verification process, which provides assurance that the product has been produced according to consensus-based best practices for GMO avoidance. You can look for their seal when you shop, or you can go to the website and browse products that have their seal.

Unfortunately, eating only organic and certified GMO-free food is not an option for some people, because of availability or price. In that case, you can get help from EWG’s Shopper’s Guide to Avoiding GMO Food.22 The guide helps consumers find products made without ingredients that are likely to be genetically modified. It also helps shoppers decide which products are the most important to buy organic or certified GMO-free.

The Pesticide Action Network has a tool called What’s on my Food? that provides more detailed information.24You can select any food from a very long list, including both plant and animal products, and it will tell you exactly what’s on it, including pesticides, neurotoxins, known and probable carcinogens, suspected hormone disruptors, developmental/reproductive toxins, and honeybee toxins (they want you to help save the bees). In the case of most of the plants, you can click on each contaminant, and it will tell you the amount found on conventional domestic, conventional imported, organic domestic, and organic imported foods.